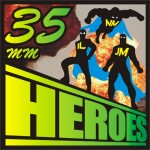 35mm Heroes is the rants and ramblings of 3 film geeks, listen as they look into and analyze the most interesting news stories of the week. Share whats been keeping them entertained movie-wise in the last 7 days and review a new release hitting a cinema near you!

One week has passed and I know you’ve missed your fix of 35mm Heroes, but don’t worry the jolly three are here once again. Join Jordan, Ian and Noel as they begin the episode by telling you what they’ve been watching this week, which includes Citadel, Hell is a City, Once Upon a Time in Anatolia, Matrix Reloaded and Revolutions, Trekkis and Beasts of the Southern Wild.

The Trailer Talk this week is for the new zombie comedy, Warm Bodies.

And all this before our feature review of Ben Affleck’s third directorial outing, Argo.