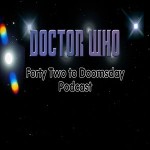 Others might review Doctor Who - we just chat about it!

42 to Doomsday - Dr Who Festival After Party!

navigateleft Back to All Episodes
Episode 47 – The Doctor Who Festival came and went in a rush that left a Moffat sized hole in our hearts! Rob and Mark are again joined by Rob Lloyd as we pick our way through the variegated highlights of this wonderful event which allowed the fans to press the flesh with Capaldi, Moffat and Gatiss as they gazed at us Down Under!

Rob Lloyd talks about the excitement of hosting multiple interviews with Gatiss and the guys behind the special effects, while down in the stalls, Mark gives the ground’s eye view of proceedings in the hustle and bustle caused by thousands of Osgood cos-players!

To find out whether Mark found his tongue after meeting Capaldi, and Rob Lloyd’s adventures in Cincinnati, tune into this, our latest and greatest podcast, (almost) live from the Doctor Who Festival!

And in the interest of balance, we quiz Rob Lloyd about his thoughts on series 9 so far before we sent fire to them!

More info on Rob Lloyd's show in Brisbane can be found at http://bit.do/bxPYY