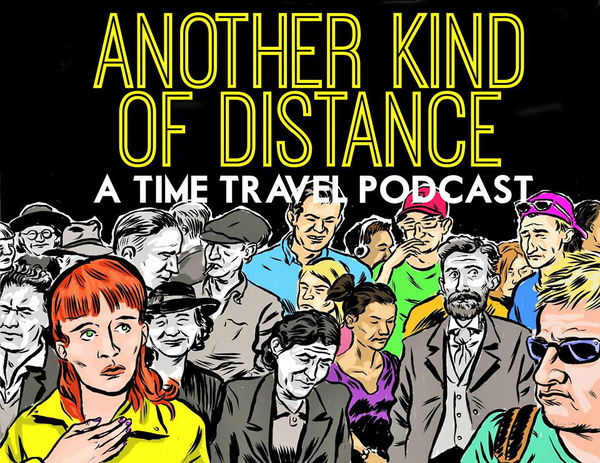 Elise Moore and David Fiore aspire to cover every time travel film ever made (in this continuum, at least). Together, we'll dive deeply and dialogically into this eternally compelling genre. Our discussions will draw from philosophy, psychology, anthropology, history, narratology, and aesthetic theory. We'll even try to wrap our minds around the physics, when the films demand it. It's an ode to paramours and paradox by two people who really give a flux.

This is also the home of: Ben-Days of Our Lives: A Comics Nostalgia

First of all, we know, we know we're not using the term “Ben Days,” or “Ben Day Dots,” with any great precision. If you want to dig into the history of comic book dots, and what they do and don't have to do with a process invented by a man named Ben Day, here's a great series of blog posts on the topic:

Also, the name of our podcast, and attendant imagery, is probably making you think of an earlier era of comic books than the one we're going to begin by treating: the 1980s. The emphasis is on the “days of our lives” part rather than the “Ben Days” part. Then why have we got the “Ben Days” part? Because Dave really likes puns, and because we both like the serialized, soap opera elements of the superhero comics of our childhoods.

Hello! We are David Fiore and Elise Moore, a couple of grad school dropouts, born in 1974 and 1975 respectively, with positively Proustian attachments to the superhero comics we read in the 80s. Dave, however, went really crazy for a few years and also read a ton of comics from the 1960s during this period, so it's possible that one day we'll stray outside the 80s. But in the meantime, we've got a lot of 80s titles we want to get through. Such as:

The Daring New Adventure of Supergirl

We don't know much of anything about comic books from the 90s onward, so we'll try not to refer to them too much, because we'll just sound curmudgeonly. Whereas we'd prefer the tone of this podcast to be celebratory. We both have backgrounds in textual analysis, which we've also applied on our first podcast as a team, ANOTHER KIND OF DISTANCE: A TIME TRAVEL PODCAST, where we look at time travel movies. However, that's a project to cover every time travel podcast ever made, whereas here, we're only looking at comic books we want to cover. So we expect that we'll find more to our liking on this podcast: even if the titles don't always live up to our memories, the memories will probably dispose us to treat them with respect and affection.

So if you love these titles too – and we're not aware of other podcasts devoted to them – please put your earbuds in place, sit back, and remember with us!

Our adorable and handily legal Facebook cover photo art was created with the help of Freepik.com and Addtext.com.

And that's not all!


This is also the home of - We're Not Gonna Talk About Judy; A Twin Peaks Season 3 Podcast

And....... it is soon to be the home of.... an as-yet-unnamed podcast which will take an in-depth look at American Transcendentalism and its many cultural, political, spiritual and philosophical manifestations!

Title: The Hollywood Studios, Year-By-Year – Paramount, 1933 – The Sign of the Cross & Island of Lost Souls

The Hollywood Studios, Year-By-Year – Paramount, 1933 – The Sign of the Cross & Island of Lost Souls

Paramount, 1933 (or so): a Charles Laughton and Karl Struss double feature. We start with Cecil B. DeMille's The Sign of the Cross, pitting piety against… Go to Episode

We get to the first Ozu in our Setsuko Hara Acteurist Oeuvre-view at last, but first we look at Tadashi Ima's two-parter, Blue Mountain Range/Aoi sanmyaku… Go to Episode

The Hollywood Studios, Year-By-Year – Universal, 1932 – The Murders in the Rue Morgue & Back Street

In this week's edition of The Studios Year-by-Year, it's Universal 1932, and we have two horror movies with wildly divergent styles. First, it's Robert… Go to Episode

For June's Special Subject, we look at three films by Bengali filmmaker Ritwik Ghatak about the aftermath of the Partition of India: Meghe Dhaka Tara/The… Go to Episode