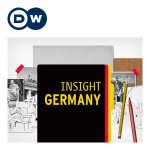 Exploring the unique perspectives of people who have come to Germany to live and work.

navigateleft Back to All Episodes
Musician and record producer Mark Reeder, who moved to Berlin in 1978, reflects on a career in the city's underground music scene. He pioneered electronic music and guided the early career of DJ Paul Van Dyke. He's just released his third studio album Collaborator.