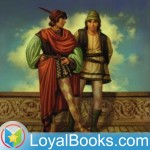 The Prince and the Pauper by Mark Twain

A poor young boy from the slums of London watches a royal procession pass, with the youthful Prince of Wales riding at its head. He ventures too close and is caught and beaten by the Prince's guards. However, the young royal stops them and invites the vagrant to the palace. Here the two boys sup alone and are stunned to discover that they bear a startling resemblance to each other. The Prince is Edward, long awaited heir of the monarch, Henry VIII, while the vagrant is Tom Canty, the son of a thief and a beggar. Edward is fascinated by the free and unfettered life that Tom leads, while Tom is overawed by the wealth and luxury of the palace. The boys decide to switch clothes. From here, adventure begins for both of them!

First published in 1881, The Prince and The Pauper by Mark Twain is the famous American writer and humorist's first foray into historical fiction. Set in the sixteenth century Tudor court of Henry VIII, the book is reputedly Mark Twain's most carefully plotted novel. Great attention has been paid to setting, dialog and character. Early plot devices are carefully constructed to become invaluable features that carry the story along. Several real historical figures appear in the book.

It is also a novel of contrasts. The two boys, born on exactly the same day, have completely different destinies. Before they meet, they each have dreams that are very different from their circumstances. Edward longs to be free to roam the streets at will, unhampered by court protocol and conventions. Tom yearns for security, comfort and the certainty of knowing where his next meal will come from.

Twain also explores ideas of conventional wisdom that deem “Clothes Maketh a Man” which implies that appearances are everything. Being a voracious reader of history himself, Mark Twain (Samuel Langhorne Clemens to give his real name) was able to use some of the material he had absorbed in The Prince and The Pauper. He faithfully renders Tudor English that he also displays in the other books Tom Sawyer and A Connecticut Yankee in King Arthur's Court.

The thrilling climax of the novel, which takes place just days before Henry VIII's death, and the coronation of the new king, is one that brings all the threads of this exciting tale together. The Prince and The Pauper has been widely adapted on screen, stage and television. Comics, animated versions, a Mickey Mouse version and many more have continued to explore this very interesting theme of switched identities. Disney films like Parent Trap, a Barbie version, a film version in Hindi, and several musical adaptations have kept this timeless classic alive.

Remove this Podcast - The Prince and the Pauper by Mark Twain

Claim this Podcast - The Prince and the Pauper by Mark Twain