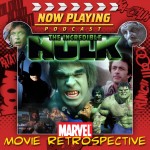 navigateleft Back to All Episodes
Mere months after Iron Man went supersonic at the box office Marvel's second issue of its Avengers movie series smashed its way into theaters--The Incredible Hulk! But after Ang Lee's film disappointed just a few years earlier Hulk's biggest enemy was audience expectations. Behind-the-scenes strife between producer/star Edward Norton and Marvel Studios only helped to add to audience superhero fatigue in a summer that also included The Dark Knight, and Hulk went on to be the lowest grossing Marvel studio film to date. Is Hulk truly Incredible, or is it as toxic as Bruce Banner's blood? Listen to Arnie, Stuart, and Jakob to find out!